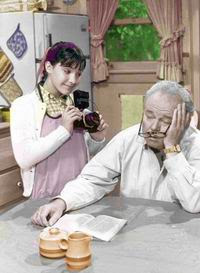 I know they probably don’t have many fact-checkers left over there, but still.

I mean, it’s one thing when the burning issue is whether it was Danielle Brisebois or Soleil Moon Frye who starred in the revival of Hair that played at the old Konover Hotel back when it was owned by Abe Hirshfeld.

(It was a deliciously grown-up Danielle Brisebois, by the way.)

It’s another thing when it’s something of actual substance:

And that paled before the tragic memory loss of Democratic Sen. Chris Dodd of Connecticut, who was so freaked out by the bonuses that he proposed a special tax to take them back, forgetting completely that he was the one who stuck an amendment into the stimulus bill the Senate passed last month that specifically OK’d the AIG bonuses.

Now what Glenn wrote is technically true, and yet utterly and completely false:

Dodd was pressured to put that carve-out in at the insistence of Treasury officials (whose opposition meant that Dodd’s two choices were the limited compensation restriction favored by Geithner/Summers or no compensation limits at all), and Dodd did so only after arguing in public against it. To blame Dodd for provisions that the White House demanded is dishonest in the extreme….

In other words, it would be like writing “King George granted the colonies their independence” or “Japan sought to negotiate a peace with the Allies during WWII.”Hey — all technically true, right?

Lisa Pisciotta is an associate with Hughes Hubbard & Reed in Miami. An attorney for nine years, her practice concentrates on commercial litigation, products liability and intellectual property.

But on Friday, she had one thing on her mind — the defense of Daniel Gray, who was charged with misdemeanor driving under the influence in Miami-Dade County Court.

“It’s hard to get trial experience when your cases are worth $300 million,” she said Friday referring to the caseload she handles with one of her firm’s partners. “It’s also a side of the law you don’t see.”

Pisciotta is one of 23 attorneys participating in a pilot project spearheaded by the Miami-Dade public defender’s office to bridge an expanding budget gap.

Miami-Dade Public Defender Carlos Martinez already has won a court ruling — which is on appeal — that his attorneys are spread too thin to adequately represent clients charged with third-degree felonies. On Friday he made a public appeal for help from private attorneys who may want a bit of trial experience to consider participating in the project.

Now this is a great idea — a way to match BigFirm attorneys, many of whom are looking for trial experience or just plain old-fashioned work — with a desperate need for legal representation here in South Florida.

Good job all around (except you, Garvin).