GITMO versus GITMO: Can we have some accurate photos please?

I read a Guantanamo article recently, and was again struck by the fact that the press [2] has no problem using 5 year old photos to depict the detention facility in Guantanamo. This is my one attempt at calling them out for repeatedly misrepresenting the conditions in the facility.

The photo, featured at right (caption mine), was taken from an ABC.com story. It is representative of the media’s malfeasance or at least their incompetence in accurately telling the Guantanamo story.

The facility depicted above was known as Camp X-Ray. It was closed in April of 2002, after only a few months of operation. It was a temporary facility, which has since been replaced by facilities on par with regular U.S. prisons. Granted, the caption accompanying the photo above stated that the image was from January 2002. However, it leaves out the key fact that the depicted facility no longer exists. And this was not a decision prompted by copy space, as the caption editor hade enough space to share the obvious fact that “the detainees [are] in orange jumpsuits.” 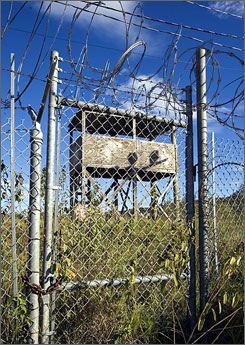 Over on the right is what Camp X-Ray looks like today. Note the 6 foot tall weeds and rusted fence. The press continually showing images of Camp X-Ray is something akin to showing photos of [3] Alcatraz and pretending they are representative of current prisons in California.

So what does the current GITMO detention facility look like? Well, the government has provided ample photos [4] here. (Note, the outdated Camp X-Ray photo was government provided).

Now I understand that using actual photos might not move newspapers as well as using outdated photos. But at some point accuracy should trump sensationalism. I’m skeptical accuracy will win out, at least until the government starts releasing more usable photos. In the interim, perhaps they should consider holding all Guantanamo related press conferences from the grounds of Camp X-Ray.

While the current images provide an accurate depiction of Guantanamo, I don’t expect the press to use this photo of a basketball court at Camp 4/Camp Delta Guantanamo:

Or even this photo of the rest of the Camp 4 facility:

The problem is that those are pretty boring pictures. Without people in them, they really are just mug shots of buildings.

But, there are more accurate images the press could be using which feature detainees. For example, these photos depicting detainees clad in culturally sensitive clothing, free to interact with one another:

Certainly not all detainees live like those depicted above. However the outdated Camp X-ray photos bear no resemblance to the high security facilities depicted below (note the cone with a “P” advising guards to be quiet during prayer time and the Koran hung from the wall of the cell).

When will the press start accurately depicting the Guantanamo facility?

The Guantánamo I Know